Paleontologists have discovered a real-life version of one of the most feared monsters in fiction… only smaller. And probably not an eldritch horror from beyond the stars.

An international team of researchers unveiled the fossilized remains of an ancient relative of the sea cucumber. It had 45 tentacles and lurked at the bottom of the seas some 430 million years ago.

They have dubbed it Sollasina cthulhu, after the tentacled Great Old One of H.P. Lovecraft’s tales, a study published in the journal Proceedings of the Royal Society B said.

Unlike the massive Cthulhu of fiction, the creature unveiled by scientists this week was quite tiny, with the fossil measuring about an inch across. However, the researchers said those 45 “tube feet” extended out in every direction and would make it seem much larger as it sat on the ocean floor, waiting and dreaming… 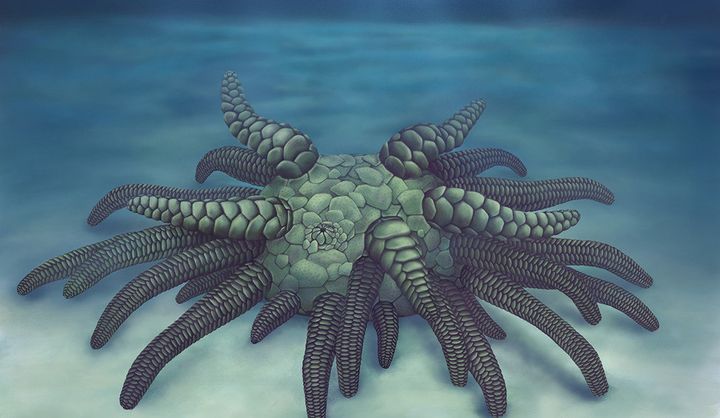 Despite its diminutive size, the creature still manages to pack a lot of nightmare fuel. Those 45 tentacles were used to snatch up food, creep along the ocean floor, and scare off predators.

Oh, and those “tubes” also had their own armor.

The tube feet of living echinoderms are naked, but in the ophiocistioids they were plated, strongly suggesting that ophiocistioids diverged from the line leading to modern sea cucumbers.